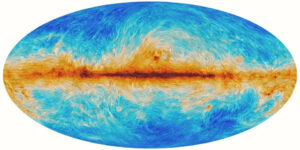 Abstract: The polarization state of electromagnetic radiation from the Universe around us is rich with additional information about the physics of the emitting sources, their environments, and any intervening media through which signals propagate on their way to Earth.  In this talk, I’ll introduce the basics of polarization (what it is, how it is produced, and how it is measured), and then review some of the ways in which it is applied in the field of astrophysics (e.g. Zeeman splitting, Faraday rotation, Thomson scattering, curvature radiation, synchrotron radiation, etc.).  Topics covered will range from the large scale structure of magnetic fields in the cosmic web between galaxy clusters, to the magnetic fields that power jets of relativistic plasma near the event horizons of supermassive black holes, to the compact fields of neutron stars known as magnetars, where the energy density in the magnetic field is sufficient to create a virtual plasma of matter and antimatter.

Willem van Straten is an Associate Professor in the Institute for Radio Astronomy and Space Research at Auckland University of Technology.  As an undergraduate in Canada, he was preparing for a job in the space industry when he learned about radio astronomy and became obsessed with pulsars. Willem then completed his PhD on high-precision pulsar timing in Australia before undertaking post-doctoral and academic staff appointments at the Netherlands Foundation for Research in Astronomy (ASTRON), The Centre for Gravitational Wave Astronomy (The University of Texas), and the Centre for Astrophysics & Supercomputing (Swinburne University of Technology). He works closely with international teams on large, long-term projects, he led the development of three scientific data analysis software packages that are used by the international community of pulsar astronomers, and he successfully led the design of the pulsar timing instrumentation for the Square Kilometre Array.